Microsoft Paint saved after outpouring of love – sort of

Microsoft says that it will put 32-year-old program on the Windows Store, but that won’t help office workers pining for some impromptu creative sessions

Microsoft Paint to be placed in the Windows Store instead of being killed off. 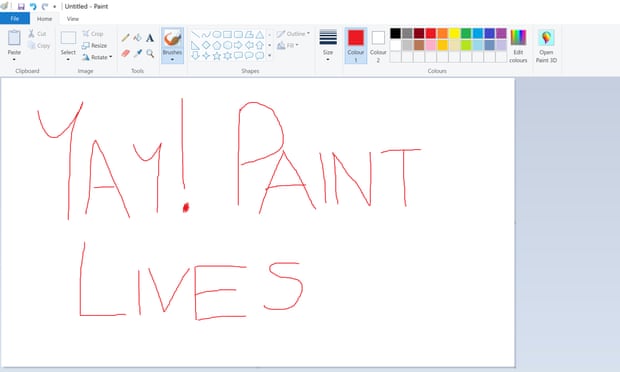 After the tremendous outpouring of love across the internet for arguably the greatest Windows program ever, Microsoft has announced that it will save MS Paint by putting it on the Windows Store.

Following the company’s announcement that the 32-year-old Paint is deprecated, meaning that it is “not in active development and might be removed in future releases”, Microsoft put out a blogpostin response to the anguished outcry at the potential removal of an old friend.

Megan Saunders, Microsoft’s general manager of the 3D for Everyone initiative, said: “MS Paint is here to stay, it will just have a new home soon, in the Windows Store where it will be available for free.

“Today, we’ve seen an incredible outpouring of support and nostalgia around MS Paint. If there’s anything we learned, it’s that after 32 years, MS Paint has a lot of fans. It’s been amazing to see so much love for our trusty old app.”

Saunders also took the opportunity to push Paint 3D, which came with the Windows 10 Creators Update, is also in the Windows Store and Microsoft hopes you will you use instead.

Saving Microsoft Paint by putting it into the Windows Store instead of being a default part of Windows going forward is good, but it’s quite not the same as actually maintaining it in its current state as a core part of Windows like Notepad or Snipping Tool. The biggest difference is that Paint will no longer be installed by default with Windows and on work and enterprise machines, it is unlikely that system administrators will allow employees to install apps from the Windows Store in most situations.

So while home users will be free to download Microsoft Paint from the Windows Store and put it back where it belongs, office workers around the world will be deprived of their impromptu creative sessions once Paint is severed from Windows as standard.